Home » Quite a Trip: The Great Ray Charles Hits the Road in His Shortest Number One Hit

Everyone should listen to Ray Charles. In a sense, it’s impossible to have the full story about American music without doing so. In 2012, Performing Songwriter posted an interview with Charles by Lydia Hutchinson. She asked how Charles stayed connected to songs he performed many times. It’s as if in a sense he is channeling something deeply American: “It’s the easiest thing in the world. You take a song like ‘Georgia,’ I’ve sung it thousands of times. But what happens is when I sing something, I never ever sing it the same way twice. And that’s not because I’m trying to be different, but it’s because I sing according to what I feel that night. Every day of our lives we feel different.” Click here or on the image for “The Ultimate Collection” at Amazon or here for “The Genius of Ray Charles” from iTunes.
Songfacts points out that “Hit the Road Jack” — at two minutes–is the shortest of Ray Charles number one singles. “What I’d Say” — while not a number one hit — was a huge song for Charles. It’s below.

The story behind “Hit the Road Jack” is interesting and a bit sad. “Hit the Road Jack” was written by Percy Mayfield (the profiles note no relationship to the more famous Curtis). Mayfield, who lived from 1920 to 1984, was a singer/songwriter with a smooth vocal style. He had a a number one R&B single, “Please Send Somebody to Love Me,” in 1950. The sense from the Wikipedia profile is that he was an important performer, if not a star.

In 1952, Mayfield was returning from a show in Las Vegas. An accident occurred and Mayfield, who was seated alongside a chauffeur, was injured so seriously that he was pronounced dead at the scene. He survived, but was disfigured. This largely ended his performing career.

Mayfield kept writing, however, and his song “Hit the Road Jack” was recorded by Charles. It hit number one on the R&B charts in October, 1961. Charles ended up recording 15 songs written by Mayfield and producing others he wrote.

The version above is slightly longer than the official release, apparently. In any case, it’s a lot of genius to pack into two minutes or so. The conversational element of the song seems unique.

Charles’ other two number one hits are “I Can’t Stop Loving You” and “Georgia on Mind.” His website has a lot of material, including a biography and discography. Finally, here is a link to the IMDb listing for the very good 2004 biopic “Ray,” which starred Jamie Foxx. They had the good sense to have Foxx lip sync the music.

I have a couple of Charles anecdotes. One, about his sense of humor, isn’t much. It’s cute, however.  Once – I forget precisely when, but a long time ago – I was listening to the audio channel on a flight. It featured a profile of the pianist. It said that he was deeply involved in a charity for deaf people. His comment (as best I can remember): “People ask me why a blind guy would work with a charity for deaf people. Well, if I ever lose my hearing, I’m outta here.”

The other is a bit more personal. I used to be a cable television industry trade reporter. The annual national show would more or less take over the town where it was held. Since it was cable, a lot of celebrities would show up. The show was in Atlanta one year in the early 1990s. One of the networks — MTV or Bravo, most likely — rented The Hard Rock for the night. None other than Charles was the entertainment (talk about top shelf).

I got there early and the place was more or less empty. Suddenly, here comes Ray Charles, with his handlers. They walked right by me. I could have touched him. He took the stage and sailed into Charlie Parker’s “Yardbird Suite,” one of the greatest piece of music ever written. It was not one that automatically comes to mind when thinking about Ray Charles. It was an amazing moment for me. Unfortunately, I had a company dinner to go to — my boss had said that anyone who doesn’t show up better be in the hospital or they’d be fired. So I had to leave. It was a very hard thing to do. 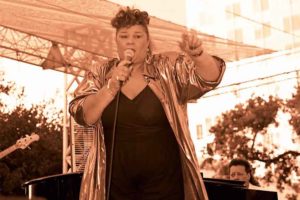