Home » Anything But Pretenders

Rock is dominated by men. That’s one reason that The Pretenders – which is fronted by Chrissie Hynde — is an important band. However, it goes much deeper, as Tom Erlewine wrote at AllMusic: “With their initial records, the group crossed the bridge between punk/new wave and Top 40 pop more than any other band, recording a series of hard, spiky singles that were also melodic and immediately accessible.  Hynde was an invigorating, sexy singer who bent the traditional male roles of rock & roll to her own liking, while guitarist James Honeyman-Scott  created a sonic palette filled with suspended chords, effects pedals, and syncopated rhythms that proved remarkably influential over the next two decades.” Ranker found fans think Learning to Crawl is the band’s best album. Here it is at iTunes. Click here or on the image for the record at Amazon.
Vintage Pretenders is, in a way, a lot like vintage Rolling Stones. Both are fronted by charismatic people who can overshadow the absolutely fantastic band behind them. In the case of the Stones, of course, there are two attention-grabbing icons, but the idea is the same.

I had that thought when “My City Was Gone,” which is about Chrissie Hynde’s hometown of Akron, OH, came on the radio yesterday. I actually had three thoughts. Two — that though campaign songs are supposed to be inspirational and upbeat, this would have been a good one for Bernie and that producing Hynde, Stephen Curry and LeBron James gives Akron a damn impressive civic legacy — were pretty random. The third was that The Pretenders were (and quite possibly still are) a great rock and roll band.

The bio of Hynde at a Pretenders fan site turns up some interesting trivia: She played in a band early on with Mark Mothersbaugh, who was at Kent State when the four students were shot in 1970. He and two other students — Gerald Casale and Bog Lewis — formed DEVO in reaction to the shootings. One of the victims was a friend of Casale. 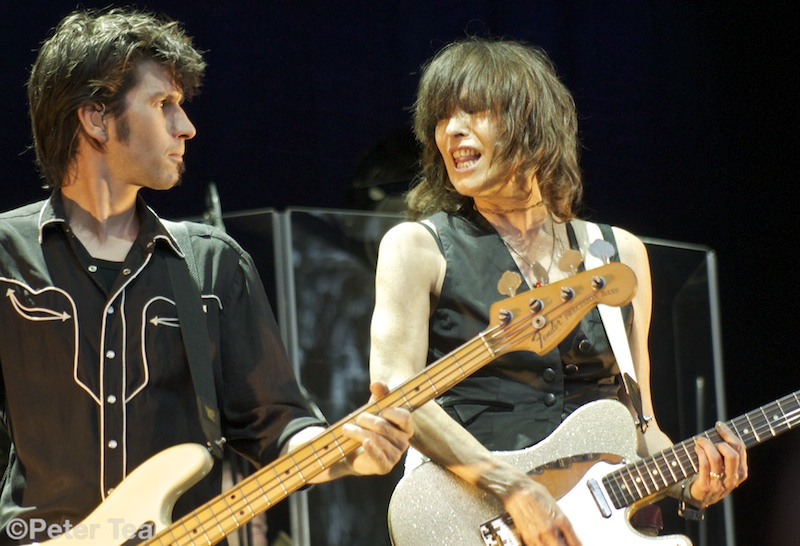 Atlantic. In her autobiography (“Prisoner: My Life as a Pretender”), Hynde describes being raped decades ago by a bunch of bikers. Her reaction was politically incorrect. She apparently took partial ownership of the incident because she was so stoned that she put herself in a precarious situation. That led to backlash, which made news at the time, included an awkward interview on NPR that is described in the piece. Not fun reading, but reality.

“Holy Commotion,” from “Alone,” band’s most recent album, shows that Hydne still sounds the same, which is the same as saying that she still sounds great.

Here are lists of top Pretenders songs from Stereogum and Ultimate Classic Rock. Below is “Precocious,” with Hydne sounding a lot like Patti Smith.

Image: PeterTea. AllMusic and Ranker are cited in the blue box.