Since The Daily Music Break doesn’t update on Sundays and since any reason to post Irish music is a good reason, the site is celebrating St. Patrick’s Day a day early with The Dubliner’s playing Whiskey in the Jar (above) and The Irish Rover (below).

Here is the beginning of a long but worthwhile profile of this hugely influential band.

Around 1961, Ronnie Drew returned to Dublin from Spain, where he had learned the guitar, and began to perform informally at parties, singing songs, and telling stories. A relatively well-known comedian by the name of John Molly heard Ronnie at one these parties and invited him join his show at the Gate Theatre. Ronnie was glad to go along as the “curtain warmer”, as well as to perform solo spots throughout the show and feed Molloy straight lines. Molloy wanted to add another musician and Ronnie suggested tenor banjo player Barney McKenna. Molly lived around the corner from O’Donoghue’s Pub and there they would meet every Friday night to get paid for the Gate gigs. Luke Kelly had come home from England with an interest in folk music, singing and playing 5-string banjo, and Ciarán Bourke played the whistle and guitar while studying in the University.

In 1962, there were few sessions in Dublin at the time. O’Donoghue’s Pub in Merrion Row was a quiet place where, according to Ronnie, “civil servants used to be sneaking in from their offices to have small whiskeys and things”. “One night,” says Ronnie, “we asked Paddy Donoghue, round about Christmastime, could we play a few tunes. So we played a few tunes. That was it.” “The music has never stopped in Donoghue’s since that day. That was more or less how the whole thing got going—or how the whole thing began.” From there, according to Ronnie, “people used to ask us to sing in places and we got a few pounds for playing. All these pubs which they used to euphemistically call cabarets—they’re just pubs—a room where you can sing. So we got a few of these.” In the beginning they were know as “The Ronnie Drew Group” because, as Ronnie states, “I had—which isn’t hard to do—attained a little fame in Dublin, because Dublin’s very small and you know all the reporters.” (Continue Reading…)

The AllMusic’s bio begins by contrasting The Dubliners to The Clancy Brothers. It sounds like the Beatles and The Rolling Stones. Indeed, the early days of all four bands were separated by just a few years and not too many miles:

Nearly three decades since they first came together during informal sessions at O’Donoghue’s Pub in Dublin, the Dubliners remain one of the most influential of Ireland’s traditional folk bands. Unlike their counterparts The Clancy Brothers, the Dubliners have never strayed from the raw looseness of the pub scene. According to Dirty Linen, “Whereas The Clancys were well-scrubbed returned Yanks from rural Tipperary, decked out in matching white Arab sweaters, the Dubliners were hard-drinking backstreet Dublin scrappers with unkempt hair and bushy beards, whose gigs seemed to happen by accident in between fist fights”. (Continue Reading…)

Here a band site featuring a nice picture of Barney McKenna, a founding member who died in April 2012. 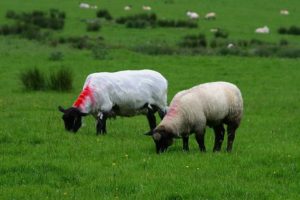 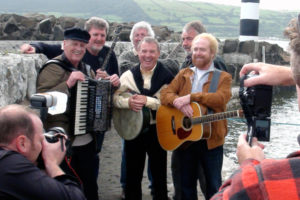 The Cranberries’ Irish Stew
The Pogues: “If I Should Fall From Grace With God” and “Body of An American”
Comment