One of the grandfathers of country music is William Orville (Lefty) Frizzell.

A huge 20-CD retrospective of Lefty Frizzell music was released late last year. That led Arkansas Online to explain why: “He probably had as much to do with shaping the sound of vocal pop music over the past 70 years as anyone, including Elvis Presley and Frank Sinatra. Many singers were deeply influenced by him — George Jones, widely considered the greatest country singer ever, lost an early gig because the auditioners thought he was a too-blatant imitator of Frizzell. Roy Orbison adopted ‘Lefty’ as his Traveling Wilburys name in his honor.” Click here or on the image for more on the compilation at Amazon. It’s a bit pricey, so here is a greatest hits collection at iTunes.
Wikipedia defines him as a “country music singer-songwriter and honky-tonk” singer. Beyond any precise definition, Frizzell influenced such superstars as George Jones, Willie Nelson, Roy Orbison, The Everly Brothers, Randy Travis, Keith Whitley, Merle Haggard and John Fogerty.

Frizzell was born in central Texas and grew up in southern Arkansas. He came to prominence towards the end of Hank Williams’ career. The two toured together in the early 1950s.

It seems to be an unhappy story, however. When he was 19 years old, Frizzell was arrested for having sex with an underage fan. One of the poems he wrote from jail to his wife – he had only been married for one year – later was recorded as “I Love You a Thousand Ways” and was a hit.

The profile charts Frizzell’s gradual rise. A turning point was when Jim Beck, the owner of a local recording studio, let him record demos for free. One of them was “If You’ve Got the Money (I’ve Got the Time),” which became a standard that Williams, Haggard and Nelson, among others, have recorded. “I Love You a Thousand Ways” was the b-side. 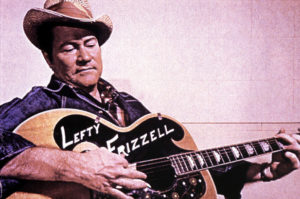 The Rockabilly Hall of Fame article on Frizzell calls him a “premiere songwriter and song interpreter.” More insight was offered by The Bluegrass Situation:

Lefty’s golden voice fueled his success. It was like nothing before it. It was liquid. It ebbed and flowed. Frizzell stretched out the vowels, breaking them up with his trademark “ay-ays.” Jimmie Rodgers’ clear and precise vocals still influenced all major country music singers. They sang straight forward and with little embellishment. Frizzell slurred his words. He broke them apart and into nonsensical phrasings. He let the feeling do as much communicating as the language. It revolutionized country music.

Frizzell was, to put it mildly, a troublesome — and troubled — man. In a review of a biography written by his brother, Chet Flippo notes that Frizzell had a bad temper that often led to fights. The incident with the underage girl was not the only time that he was unfaithful. He and his wife, Alice, had a long and tempestuous marriage. She finally filed for divorce.

Frizzell also was an alcoholic who died of a stroke at the age of 47.

Arkansas Online was cited in the blue box.