One of the great things about music is how a good song – or, more accurately, a good melody – can move freely between genres.

It’s second nature, of course, but worth thinking about. Examples abound: Emerson Lake and Palmer did “covers” of Aaron Copland’s “Hoe-Down” (from the ballet “Rodeo”) and Mussorgsky‘s “Pictures at an Exhibition” that almost certainly would have tested the flexibility of the composers. Most famously, Janis Joplin did a version of “Suumertime” that the Gershwins would have barely recognized and, once they did, possible hired an attorney. 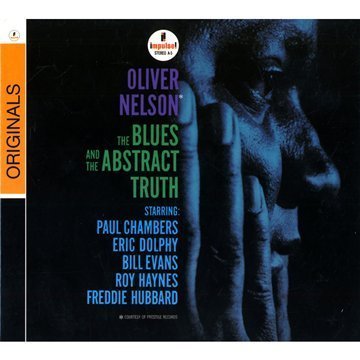 Another way in which genres of music impact each other is in the very creation of a song or musical work. Music scholars point to folk influences on classical music, for instance. I’m quickly getting beyond my narrow (to microscopic) area of expertise. Two things are clear, however: The lines between musical genres are porous and all music benefits from that fact.

This all brings us to Oliver Nelson. Above is a version of “Hoe Down” that is just great. No wonder: The legendary Clark Terry, who played trumpet and flugelhorn on the song, takes a great solo. It’s less than three minutes from start to finish. The drummer, by the way, is Ed Shaughnessy. He played in the Johnny Carson Show band for years and backed a young guest by the name of Hendrix.

Nelson, who lived from 1932 to 1975, is not as well remembered other many other jazz players from the middle of last century. He played sax and clarinet and was composer, band leader and was an in-demand arranger. Wikipedia says that his 1961 Impulse! album “The Blues and the Abstract Truth” is “widely regarded as one of the most significant recordings of the modern jazz era.”

It’s always interesting when jazz musicians take on classical music, as Nelson does here with Copland’s “Rodeo.” In 2015, Jordan Smith at CMUSE posted 15 notable examples. They include a couple of Duke Ellington pieces (“Sugar Rum Cherry” and “Peer Gynt”) and Art Tatum (“Humoresque” by Dvorak). (Click here or on the image for Ellington’s “Three Suites’ CD from Amazon and his “Deep South Suite” at iTunes.) James Bennett II and Zev Kane offered their choices at WQXR’s blog. They include Miles Davis’ version of Adagio’s “Concierto de Aranjuez,” which was part of “Sketches of Spain.”
That album was his seventh. The previous six, Wikipedia says, were recorded for Prestige between 1959 and 1961. If a musician is judged by the company he or she keeps, Nelson was admired. Personnel on the records include Kenny Dorham, Eric Dolphy, Roy Haynes and King Curtis. He worked as an arranger for such greats as Cannonball Adderley, Sonny Rollins, Eddie “Lockjaw” Davis, Johnny Hodges, Wes Montgomery, Buddy Rich, Jimmy Smith, Billy Taylor, Stanley Turrentine and Gene Ammons. That sounds like a list of jazz hall of fame members.

This isn’t a particularly well structured post since Oliver Nelson isn’t particularly connected to the idea of presenting classical music as jazz. Seeing his version of Hoe Down stimulated the thought, however.

Above is “Hoe Down”–Nelson took out the hyphen — and below is the stately “Emancipation Blues.”

WQXR and CMUSE were referenced in the blue box.

The Curious Tie between a Founding Father of Jazz and Maroon 5
January 16, 1938: Benny Goodman Brings Jazz to Carnegie Hall
Comment