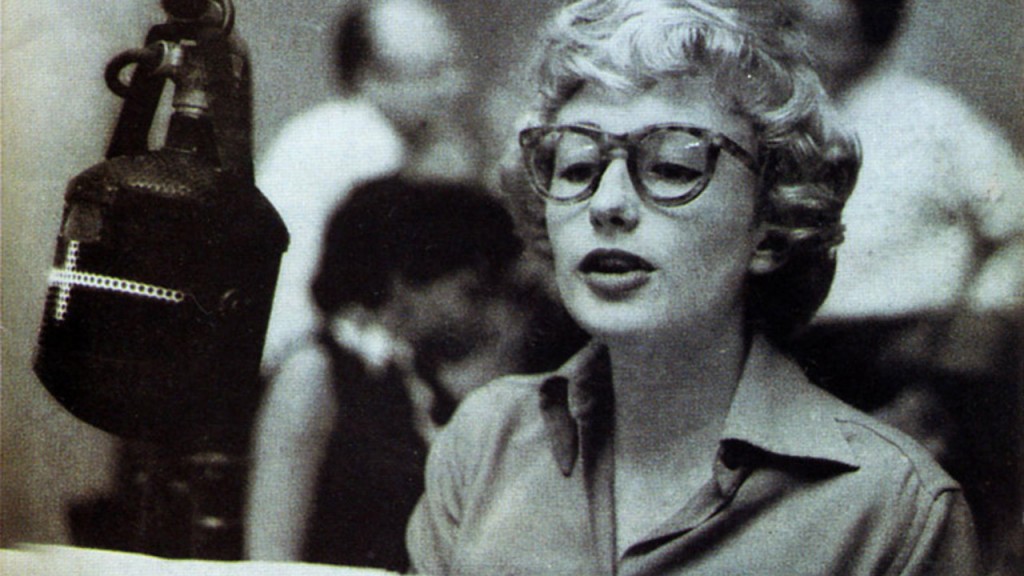 Blossom Dearie was not a superstar, but made a name for herself and had a long and successful career.

The unique name wasn’t made up. Margrethe Blossom Dearie was born near Albany, New York in 1924. After high school, she moved to New York City and joined The Blue Flames vocal group. It sang with the Woody Herman bands and others.

Dearie, who was a terrific piano player — she plays most of the piano in the songs in the playlist below — became a solo singer and moved to Paris in 1952. She formed a vocal group and had a hit with a French-language version of “Lullaby of Birdland.” Dearie returned to the states and began making solo records. She was one of the last of the supper club singers, and performed until 2006. She died three years later.

[contextly_sidebar id=”WrMudRx9Ujz5cNQqjvl9QuaXsBJ6DTyG”]Stephen Holden’s obituary in The New York Times described a singer who “blurred the lines” between jazz and cabaret. She was a minimalist who was unique, a “a genre unto herself.” She also was not afraid to let people know which music she didn’t like. Andrew Lloyd Weber, Holden writes, was a favorite song writer for whom Dearie had no use.

This is from her bio at Verve, which obviously was written before she passed away:

Her musical roots are in jazz as well as popular song, but her voice and style are uniquely hers (“chic, sleek and squeeky-clean, a voice in a million” says Leonard Feather in the Los Angeles Times). She often tours in Europe, Australia and across the globe performing her light-hearted, fanciful and funny songs for sophisticated audiences. Her very special repertoire ranges from Gershwin, Porter, Rodgers and Hart and Johnny Mercer favorites to comic gems by John Wallowitch and Dave Frishberg and romantic ballads she composed herself to lyrics by Jack Segal.

Verve, AllMusic, The New York Times and Wikipedia were used in to write this post.

This Day in Music: “The Nat King Cole Show” Debuts
Keiko Matsui: “Light Above the Trees” and “Water Lily”
Comment