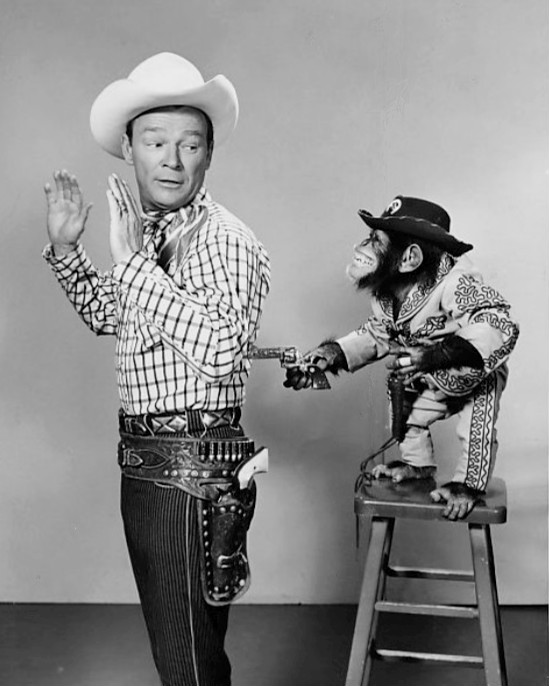 There is no doubt that the music made by Roy Rogers, Dale Evans and what apparently were a a series of comic relief third parties, is corny and trite. That doesn’t in any way disqualify it. Indeed, it’s well done and interesting. I love some of the songs, especially “Lights of  Old Santa Fe” and, of course,  the melancholy “Happy Trails.”

What is very interesting to think about is where Rogers and crew fit in the context of our cultural history. Rogers was one of the earlier multimedia

superstars. He excelled as a singer and actor and vied with Gene Autry for the top spot in this crossover category.

The other thing to think about is that the duo celebrated an America that didn’t exist in anywhere near the form they portrayed it. Clint Eastwood made “Unforgiven,” one of the great movies of the last thirty years, expressly to illustrate the old west as it really was. The greatest creator of the myth was John Wayne. Rogers had a hand, too, however. And myth making is part of what America is all about. There was a program on PBS years ago called “The Great American Dream Machine.” I forget what the series was about, but it sure was a great title.[/column] [column size=one_half position=last]

The profiles of Roy Rogers — originally, Leonard Franklin Slye — as a wanderer. He was born in Cincinnati in a spot that subsequently was covered by Riverfront Stadium. (He would joke that he was born on second base.) Rogers didn’t like city life and built a houseboat with his brother. The family bought land in Portsmouth, Ohio and planned to build a house on it. A flood in 1913 enabled them to simply anchor the boat over their land, wait for the waters to recede and put a mailbox in front of the grounded houseboat. Or so Wikipedia says. Rogers eventually moved west.

The profile at AllMusic is very good. Bruce Eder sums up the importance of Rogers at the beginning:

When Cincinnati-born Leonard Franklin Slye headed west in the spring of 1931, it was as a would-be musician, working jobs ranging from driving a gravel truck to picking fruit in California’s Central Valley. In less than two years, he’d co-founded the greatest Western singing group of all time, the Sons of the Pioneers, and barely four years after that, he’d started a career as a movie star under the new name Roy Rogers. Ultimately he found great fame as a movie and TV cowboy and even founded a very successful chain of restaurants.

An interesting note is that the name Rogers was taken from Will Rogers.

Wikipedia and AllMusic were used to write this post.[/column]