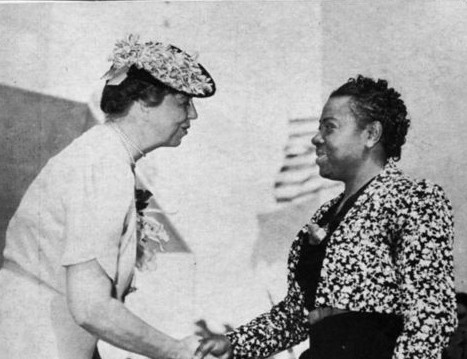 This post actually focuses on two people: Eva Jessye and Mari Newland, and features an interview with the latter.

There are a lot of extremely important people who don’t gain notoriety. Eva Jessye is one of them. According to Wikipedia, Jessye was the first African-American to become a well known international choir conductor. She was a teacher whose influence reverberated for decades and was important in the Harlem Renaissance. Jessye worked with George Gershwin on opera Porgy and Bess, one of the most important pieces of music in American history.

I did a post on Jessye about a month ago, and used a video of Marti Newland singing a song she arranged. I did some checking and found out that Dr. Newland actually has a couple of vocations. She is a soprano who has performed in recitals and oratorios in the United States and Europe.

Her list of credits – which includes a role as a choirister in the New New York City Opera’s production of Anna Nicole, a guest soloist with the Fisk Jubilee Singers and a performance as Glenda in “The Wiz” – is wide and varied.

Dr. Newland also is a Core Lecturer in Music Humanities at Columbia and earned a Ph.D. last year from the Columbia Ethnomusicology program. Her specialty is voice studies and African American music. Dr. Newland’s dissertation was “Sounding Black: An Ethnography of Racialized Vocal Practices at Fisk University.”

Wikipedia and Dr. Newland’s website were used to write this post. The music at the beginning and end of the is “Bless My Soul an’ Gone,” with Dr. Newland accompanied by Artis Wodehouse.