I ran into Baden Powell de Aquino simply by random surfing that ended up at a site called The Music Room (that I can’t find any more). Powell, a Brazilian guitarist and composer, was terrific.

Here is more on Powell:

Roberto Baden Powell de Aquino (6 August 1937 – 26 September 2000) usually known simply as Baden Powell, was one of the most prominent and celebrated Brazilianguitarists and guitar composers of his time.[1] He explored the instrument to its utmost limits, playing it in a distinctive, unique manner, incorporating virtuoso classical techniques together with popular harmony and swing. He performed in many styles, including bossa nova, samba, Brazilian jazz, Latin jazz and música popular brasileira. He performed on stage during most of his lifetime, and recorded an extensive discography composed of LP and CD albums produced in Brazil and Europe, particularly in France and Germany. (Continue Reading…)

Above is “Manha de Carnaval” from 1970. Yes, the cigarette thing is cool. Albert King played while actually smoking a pipe, which I guess is even more impressive. 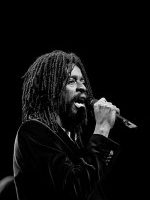