Evidence of the importance of “Stagger Lee” is the fact that it has its own website.

The murder of Billy Lyons by Stagger Lee was an actual event. Here is the story that appared in the St. Louis Globe-Democrat on December  28, 1895: 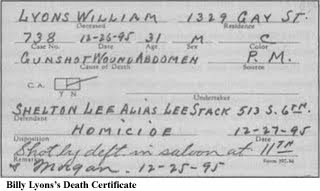 William Lyons, 25, a levee hand, was shot in the abdomen yesterday evening at 10 o’clock in the saloon of Bill Curtis, at Eleventh and Morgan Streets, by Lee Sheldon, a carriage driver.

Lyons and Sheldon were friends and were talking together. Both parties, it seems, had been drinking and were feeling in exuberant spirits. The discussion drifted to politics, and an argument was started, the conclusion of which was that Lyons snatched Sheldon’s hat from his head. The latter indignantly demanded its return. Lyons refused, and Sheldon withdrew his revolver and shot Lyons in the abdomen. When his victim fell to the floor Sheldon took his hat from the hand of the wounded man and coolly walked away.

He was subsequently arrested and locked up at the Chestnut Street Station. Lyons was taken to the Dispensary, where his wounds were pronounced serious. Lee Sheldon is also known as ‘Stag’ Lee.

It’s hard to say why a fairly routine murder has achieved mythic status, but it has. Hundreds of songs have been written about Stagger Lee, who is also is called Stackolee, Stack O’Lee and many other versions of the name. Another page on the site lists no fewer than 428 versions of the song. Even that list is incomplete: Versions by Amy Winehouse and Hugh Laurie aren’t mentioned. (Laurie–Dr. House–is a lover and performer of blues and New Orleans music and does a great job on the song.)

For once, the Internet came up a bit short. Looking up “iconic songs” produced lists that were accurately labelled (i.e., top songs of the past decade). But lists claiming to be the top songs ever seemed strangely to start with the 1950s. That seems to be a misrepresentation. On an unrelated note, the same lines pop up all over the

place. This characterizes blues and country and often the lines and songs themselves cross boundaries. The bottom line is that songs and lyrics are very portable. Click here or on the image for more on the book “Unprepared To Die – No. 1: Stagger Lee (Unprepared To Die: America’s Greatest Murder Ballads And The True Crime Stories That Inspired Them” by Paul Slade. It has a chapter about the legend of Stagger Lee. Click here for Lloyd Price music.

Another gauge of the importance of the song is the variety of people who have recorded versions. It probably would be hard to find other songs performed by artists as diverse as Mississippi John Hurt, Fats Domino, Neil Sedaka, Elvis, Jerry Lee Lewis, Taj Mahal, The Beach Boy’s Mike Love, The Grateful Dead and Nick Cave. The list goes on and on.

The breakthrough, crossover version of the song was by Lloyd Price. The version reached number one on Billboard’s Top 100 in 1959. Songfacts says that public reaction led ABC-Paramount had Price record an alternate ending in which Bill Lyons lived. That seems to ruin the point of the song, but happy endings (or at least non-fatal ones) may be necessary for wide commercial success.

Wikipedia says that the first mention of the song was in the Kansas City Leavenworth Herald in 1897. It was performed, the paper said, by “Prof. Charlie Lee, the piano thumper.” The first recording was by Fred Waring’s Pennsylvanians, apparently in 1923. The versions on YouTube have no lyrics, however. Personal favorites are versions by Taj Mahal and David Bromberg. The latter is does away completely with Stagger Lee’s name in the title. It’s called “Mrs. Delion’s Lament.”

StaggerLee.com has an fascinating list of important dates in the history of the song and the people in it. One of the most interesting:

1910, February. Miss Ella Fisher of Texas sends John Lomax, a pioneering musicologist and folklorist, 8 stanzas of The Ballad of Stagalee. She writes to him, “This song is sung by the Negroes on the levee while they are loading and unloading the river freighters.”

More on the song is at at American Blues Scene. Above is the version by Mississippi John Hurt. Below is Lloyd Price’s.