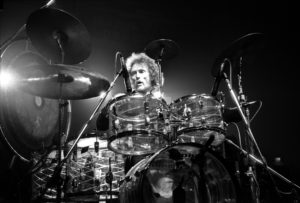 This is a very sad story. Ironically, it started as a funny anecdote about a person’s last few hours.

One of rocks legendary feuds is between Ginger Baker and Jack Bruce, two-thirds of Cream. They just didn’t get along. Jim Clash wrote in 2016 at Forbes that when Bruce was fading away in 2014 he called Baker and said something along the lines of, “Ginger, I am dying. F**k you” and hung up. So it was a funny story about a sad thing.

Clash suggests that the story may not be true. But whether it is or not, he wrote, it pretty well sums up the relationship.

A bit of Googling about Baker quashes the humor. Ginger Baker is an extremely bad guy, and it isn’t funny. Of course, what other people say can be driven by their jealousy and ego. But it is important to listen to what somebody’s kid says. This is from a Rolling Stone interview with Baker’s son Kofi that was posted last June. Early in the interview, Andy Greene asks the younger Baker if being Ginger’s son complicated his efforts to establish himself as a drummer. Part of his answer:

It’s never really bothered me because my dad is such an asshole anyway that it’s not like I was stressed about making him proud or anything. So, no, it wasn’t really stressful.

Baker returns to his view of father later in the interview. Greene asks how he felt about his dad during the time he was living on the streets:

Well, I didn’t really know him. It wasn’t an issue. I just played drums and stayed alive. It didn’t really dawn on me until I was a bit older what an asshole [he was] and what he’d done. I’d think, “He had all this money!” Once he did that 2005 reunion and made a whole bunch of money again I was like, “Wow, he’s made 5 million dollars. Things are going to change now.” I said, “Dad, why don’t you buy property with this money? The best thing you can do is buy real estate and I’ll rent it from you. That way I’ll pay money to you rather than someone I don’t know.” And he was like, [Perfect Ginger imitation] “Fuck off, no. I’m buying my horses.”

That’s when I realized this guy doesn’t give a shit. That was when I realized he doesn’t really care. None of us are speaking to him, me or [my sisters] Nettie and Leda. It’s kind of a shame. I emailed him a couple of days ago to just say, “Dad, what the hell? Why don’t you support me or say something nice?” No response. I just thought I’d try one more time. He’s getting old.

The musical community is like any other. There are wonderful people and there are jerks. Baker seems to be the poster child for the latter group. This is the first paragraph of a November, 2012 New York Times feature:

Right at the beginning of the new documentary “Beware of Mr. Baker,” the film’s director, Jay Bulger, is attacked by his subject, the rock drummer Ginger Baker. Not verbally attacked, mind you — though there will be plenty of that — but physically, with a metal cane that draws blood when applied to the bridge of the filmmaker’s nose. Mr. Baker, whom we will subsequently encounter in less agitated moods, is upset about the direction of Mr. Bulger’s project.

The more you read about Baker, the more depressing it gets. On one level, various drummers attest to his genius. On the other, nobody says anything nice about him and much of what he says is more evidence that he is a bad guy who has matured into a bitter old man. He’s a caricature. A very good, very long 2009 profile in Rolling Stone is particularly sad – even pathetic. The piece was written by Bulger, the guy who got hit. He paints a picture of a drug-addled and sick old man who retains his nastiness while re-fighting old battles.

Kofi Baker had to tie his drums to himself so they wouldn’t be stolen when he was homeless. He suffered in other ways because of his father’s evil nature. The lesson? Simply being decent and taking care of your kids makes non-geniuses such as us far more successful than one of the world’s most famous rock musicians.

But nobody can take his drumming away from him. Below is an alternate take of “N.S.U.” from the BBC.

It’s possible to make the case that after The Beatles and The Rolling Stones, Cream is the most important band in rock history. It’s subjective, of course, and other bands certainly can claim third spot. But it not an unreasonable position. Cream was formed in 1966 and was considered the first super group. It set the tone for the guitar/bass/drums power trio format that dominated rock for decades.  The short lifespan of the band adds to the legend. “N.S.U.” is the first cut on “Fresh Cream,” the band’s debut album. Other important songs on the album are “Spoonful,” “”Rollin’ and Tumblin’,” “Toad,” “Sleepy Time Time” and “I’m So Glad.” The latter was written by blues legend Skip James. The band made sure he got royalties something that at times was “overlooked” by management in those days. Click here on the image for a digitally remastered version of the album.

Photo of Baker above: Zoran Veselinovic

Check It Out • Rock

Check It Out • Country • Rock

Check It Out: Chuck Berry’s “Turn on the House Lights”
Heavyball: “The Perils of Midweek Drinking” and “Another Country”
Comment