A version of this playlist appeared when the great John Renbourn died about four years ago. The site has had some technical difficulties and the playlist was off line for a long time. Here is a new version.

A great number of tremendous guitar players were born in Great Britain during and just after World War II. Some of them —  Keith Richards, Eric Clapton  and the gang — became very famous. Others, such as Renbourn, couldn’t (or didn’t want to) become rock and roll heroes. They were great, however. I bet these folks all knew each other.

Renbourn was close friends with Bert Jansch, another legendary guitarist and fellow co-founder of the important group Pentangle. Other great acoustic (or mostly acoustic) guitarists of this era include Richard Thompson (who straddles the acoustic and electric worlds) and Davy Graham. I am not knowledgeable enough to draw the lines between them all. In general 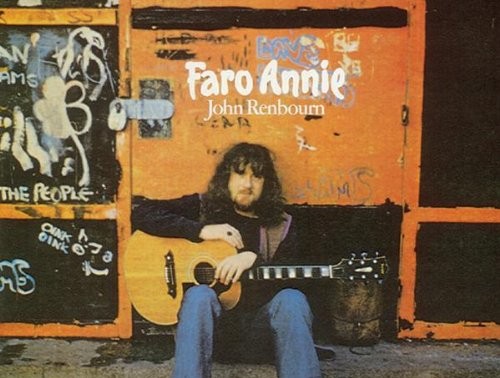 , they drew on American blues, English folk and European influences. In some cases they incorporate styles that are centuries old and were not generally, to that point, thought of as modern guitar music. (Editor’s note: I don’t know where that last bit came from in the original post. I either read it somewhere or made it up.)

The Brits did more to reintroduce the world to the old blues than the Americans. Faro Annie is squarely in that tradition. For instance, “Little Sadie” (or bits and pieces of it) shows up in blues and country music. Renbourn gives that mixture a British flavor.

The story tells the tale of a man who kills a woman, suddenly recognizes that it was not a great career move (“I began to think what a deed I’d done/and I grabbed my hat and started to run”) and tries to get away. Different versions have him captured in different places. Johnny Cash sings a version under the name “Cocaine Blues.” The title provides the reason the man — named Jack Brown in that version — acted so impulsively.

Most of the songs are deeply American. “White House Blues” tells the story of William McKinley’s assassination and Theodore Roosevelt’s rise to the presidency. “Buffalo Skinners” describes the lives of the men who killed all the buffaloes.

My fondness for Renbourn is very focused. In my opinion, his 1971 album “Faro Annie” is one of the greatest ever. My brother owned it and I listened when I visited him at college. To be honest about it, I am not even sure that it’s one of his major works.

The only cut that isn’t directly from the album is “Kokomo Blues.” The song is on Faro Annie, but the version here is a much later live performance. Renbourn introduces it by describing the town’s role in Prohibition.

Here is the album at Amazon and at iTunes.

The image in the playlist is by Thom C.