Home » What is Americana?

I’ve often wondered how “Americana” is distinguished from other genres of American music. The answer seems to be that the powers-that-be have done something at which they are skilled: Rebranded and created a new niche.

Here is the definition of Americana in Wikipedia:

Americana is an amalgam of American music formed by the confluence of the shared and varied traditions that make up the musical ethos of the United States, specifically those sounds that are merged from folk, country, blues, rhythm and blues, rock and roll, gospel, and other external influences. Americana, as defined by the Americana Music Association (AMA), is “contemporary music that incorporates elements of various mostly acoustic American roots music styles, including country, roots rock, folk, gospel and bluegrass resulting in a distinctive roots-oriented sound that lives in a world apart from the pure forms of the genres upon which it may draw. While acoustic instruments are often present and vital, Americana also often uses a full electric band.

The tricky thing is that each of the genres already are deeply influenced by each other. Country and blues music have evolved synergistically. Bluegrass is a part of the broad country music family. Rock is inseparable from blues. So to create a separate category called “Americana” seems to be redundant. Americana seems to be nothing more than another way of saying American music.

It seems that far more music produced in this country would fit under the term than wouldn’t. I guess jazz would be mostly outside the tent as the term currently is used. Classical and pop as well. The point is, however, that those genres are heavily influenced by music that would be inside that tent looking out. Just listen to “Rhapsody in Blue,” “Mood Indigo” and much pop – itself a derivative term – that is on the radio.

All that said, I love the term Americana. Anything that gets people to discover or rediscover all this great music is good. The rest is semantics.

The great site Digital Dream Door offered its take on the the top 100 Americana songs. There is great music up and down the list. I chose two more or less at random. Above is “Tennessee Plates” by John Hiatt and below is “Billy the Kid” by Ry Cooder (playing mandolin).

As if to prove that Americana is a confusing term, Amazon doesn’t appear to carry “Americana” albums. The site offers records with the word in the title performed by a specific band or performer and of course offers lots of American music. But it doesn’t seem to offer classify it a distinct genre. In any case, here is some great music. John Hiatt anthologies are at Amazon and iTunes. Amazon has a Ry Cooder anthology and iTunes offers “Chicken Skin Music,” which is considered one of his best records. 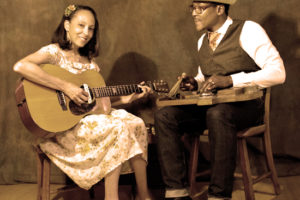 Piedmont Bluz: “Joliet Bound” and “That’s No Way to Get Along”