Home » The Skatalites: “Guns of Navarone”

The Skatalites, a long-standing Jamaican band play ska, which is a precursor to reggae. Wikipedia, believe it or not, has a lot to say on the topic:

Ska ( /ˈskɑː/, Jamaican [skjæ]) is a music genre that originated in Jamaica in the late 1930s, and was the precursor to rocksteady and reggae.[1] Ska combined elements of Caribbean mento and calypso with American jazz and rhythm and blues. It is characterized by a walking bass line accented with rhythms on the upbeat. In the early 1960s, ska was the dominant music genre of Jamaica and was popular with British mods. Later it became popular with many skinheads.[2][3][4][5] Continue Reading…

The band goes back to 1964. Here is the beginning of the bio from its site, which has some great autoplay music:

The Skatalites brought together the top musicians and styles of the time—fusing boogie-woogie blues, R&B, jazz, mento, calypso, and African rhythms—to create the first truly Jamaican music: ska. Throughout the mid-20th century, experience in big bands solidified the prowess of most Jamaican musicians; yet, the genesis for many of the great Skatalites goes back to a boys’ school established for the wayward.

Above is Guns of Navaronne. The Skatalites enjoy reinterpreting movie music. They do The James Bond Movie Theme (from Dr. No) and others. Below is TDynamite. 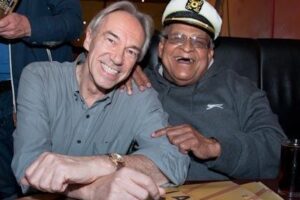