This autobiographical post at Leo Kottke’s site probably says as much about the great guitarist as a traditional bio. The guy can write. Here is the start:

Studying with three teachers in three years, I was a trombone student in Oklahoma until I was about fifteen years old. Each weekend at one of their houses I’d wait in the kitchen until the trombonist in the basement would yell up at me to come down– they taught in their basements. I would descend, assemble my horn, sit in a folding chair, park my sheet music on the stand, weather some insult aimed at my embouchure, and play whatever I had not been studying for the last week.

My teachers– industrious, frugal, starving men– had one thing in common other than my unpreparedness: they’d all installed do-it-yourself showers in those basements. These units stood in some corner, usually my corner, and they’d drip… ploink, ploink. There was nothing more ominous than basements with leaking showers in them, and there was no telling when fear began, but my trombone kept those home improvements at bay. (Continue Reading…)

This Last.fm bio is more traditional — and no less interesting:

Leo Kottke (born September 11, 1945 in Athens, Georgia) is a legendary acoustic guitar virtuoso who has developed a cult following of fellow guitarists and fans over the span of a 30-year career of recording and performing.

Blending folk, jazz, and blues influences into a signature finger-picked style of syncopated, polyphonic music, Kottke’s work pre-dated and predicted much of the New Age instrumental music movement, and is often considered part of the American Primitivism movement, partly because he was signed to John Fahey’s Takoma Records label.

Kottke has collaborated on his records with his mentor John Fahey, Chet Atkins, Lyle Lovett, Margo Timmins of the Cowboy Junkies, and Rickie Lee Jones. He has recorded tunes by Tom T. Hall, Johnny Cash, Carla Bley, Fleetwood Mac, The Byrds, Jorma Kaukonen, Kris Kristofferson, Randall Hylton and many others. He is also a frequent guest on the radio variety program A Prairie Home Companion.

The top song, Vaseline Machine Gun, probably is Kottke’s best known song. This version was the second half of a CNN interview, which is pretty interesting. The music starts at about 1:45 and the end is cut off, but it probably is the best video on YouTube of the song. Last Steam Engine —which was written by John Fahey — is below. 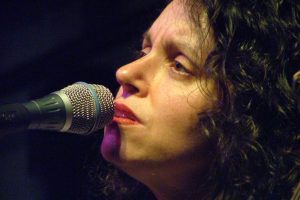 John Prine: “Angel From Montgomery” and “In Spite of Ourselves”
Lumineers: Flapper Girl and Ho Hey
Comment