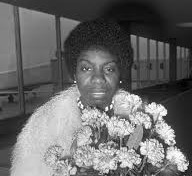 Nina Simone’s career tracks the experience of female African American artists during the middle and later part of the 20th century. The bottom line is that it wasn’t easy.

Simone was born as Eunice Kathleen Waymon in 1933 in Tyron, North Carolina. She was the sixth of eight children. The young Waymon auditioned for a scholarship to The Curtis Academy in Philadelphia. She was rejected — and later told that the reason was the color of her skin.

Simone moved to New York City and studied piano at Julliard. She supported herself by playing jazz, standards and blues in clubs — and began singing at the behest of the owner of one of them. Eventually, she signed a record deal and had a hit with “I Loves You Porgy” from “Porgy and Bess.” Simone changed her new name in 1954 and worked the coffee houses in Greenwich Village and befriended Langston Hughes, James Baldwin and other important figures in the African-American community. A great photo of Simone and Baldwin accompanies a long story about the singer in this week’s New Yorker.

Simone became increasingly radicalized and civil rights music became an ever-bigger part of her repertoire. At one point she backed armed struggle as a way for Blacks to gain their own homeland.

[/column][column size=one_half position=last ] [/column]Simone was diagnosed with bipolar disorder later in life. This led to erratic behavior, including shooting at a record executive (not the first performer to want to do so, to be sure).  She missed.

Simone could be impervious and difficult, but warmed up later in her career. Biography suggests that Simone was difficult to categorize:

In many ways, Simone’s music defied standard definitions. Her classical training showed through, no matter what genre of song she played, and she drew from many sources including gospel, pop and folk. She was often called the “High Priestess of Soul,” but she hated that nickname. She didn’t like the label of “jazz singer”, either. “If I had to be called something, it should have been a folk singer because there was more folk and blues than jazz in my playing,” she later wrote.

Simone died, probably of breast cancer, in France in 2003.

Home page photo: Ron Kroon. Information from Biography and Wikipedia was used in this post.

The Many Worlds of Valerie June

Before “The Voice,” There was Lou Rawls
Yes, We Have Emails — and The Marvelettes