My Web person told me that in order to please Google and the other search engines, I need to write longer items for The Daily Music Break.

That poses a bit of a problem. I really don’t know enough about most musicians to write more than a few paragraphs. Researched pieces can be valuable, but could be boring and academic. People come to music sites to hear music and, perhaps, pick up a tidbit or two.

I began trying to find a formula for writing longer pieces that would hold people’s interest. The trick is to find higher level topics that include several musicians and/or bands. This would lead to articles that actually add something to the conversation in an entertaining manner. One idea is to profile various years in music.

The first year I chose is 1970. People familiar with music during the second half of the 20th century knows that 1970 was an important year in rock – and one that it ended tragically. I had no conception of the flood of that year’s flood of creativity. It is overwhelming. Of course, in some cases material was not recorded in 1970. “Let it Be,” for instance, was a reworking of material that The Beatles had recorded before “Abby Road.”

Most people agree that the modern rock era began in the first half of the 1960s. By 1970 things were beginning to change. The Beatles were already gone. Ironically, however, the band and its members dominated the year. In addition to “Let It Be,” Paul released his eponymous album, John and Yoko released “John Lennon/Plastic Ono Band” and George released “All Things Must Pass” (which alone makes it an important year). Another early rite of passage was that The Jimi Hendrix Experience was no longer. Hendrix released “Band of Gypsys” with his new group.

There were less remembered – though not necessarily inferior — albums by important groups, such as “Sun Flower” from The Beach Boys and “Loaded” from The Velvet Underground. Other 1970 albums noted by Classic Rock are “Funkadelic” by George Clinton’s band of the same name and Captain Beefheart’s “Lick My Decals Off, Baby,” which I am sure added a touch of class and elegance. Finally, a poignant release was “The Madcap Laughs,” which was Syd Barrett’s first solo album. Barrett, who seemed to be a victim of the age in which he lived, had been fired by Pink Floyd two years earlier.

It was obviously quite a year. Perhaps the convergence of several things can at least partly explain the outpouring: Rock had been around long enough that the artists, producers and recording personnel had taken their crafts to higher levels. At the same time, all of these musicians obviously still were in their highly creative periods. Finally, perhaps the business side of the recording music was lagging a bit and still struggling to align commercial realities with the explosion of creativity. This tension would likely make them more open to giving the musician greater freedom to explore.

The year would end tragically with the deaths of Hendrix in September and Janis Joplin in October. Indeed, it is fair to say that 1970 was the high water mark for rock and roll music and, perhaps, the genre never truly recoveed from the two deaths.

Ten Musical Notes and New Music for the Week of January 28, 2018 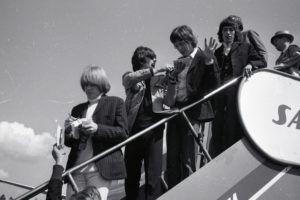