There are a great number of important musical birthdays at this time of year. Recently, The Daily Music Break posted on Junior Kimbrough and Ramblin’ Jack Elliott. Others include Tony Bennett, Chuck D, Robert Cray, Francis Scott Key, Jim Capaldi and others. 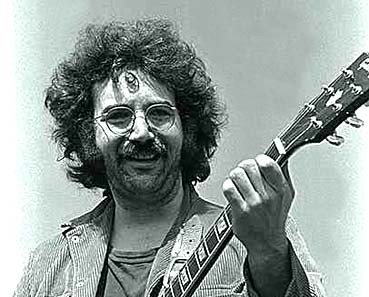 Another early August birthday celebrant is Jerry Garcia, who would have turned 75 on Tuesday. Many people know far more about him than I do, though the Grateful Dead is my favorite rock and roll band. In addition to loving their music — and, in particular, Garcia’s voice and Robert Hunter’s brilliant lyrics — I like neat coincidences. The genesis of the band’s name is almost too good to be true.

My knowledge pales in comparison to millions of people. Deadheads of course are the brunt of endless teasing. There is another side to the story. Check out the respect and affection shown by Branford Marsalis, who played extensively with the band. The clip is set to start at that part of the discussion, but the entire interview is great.

Here’s what I can add: A bit about Garcia’s upbringing. Garcia’s paternal ancestors, according to Wikipedia, were from Galicia in northwest Spain. His material heritage is Irish and Swedish. He was born in San Francisco on August 1, 1942 to Jose Ramon “Joe” Garcia and Ruth Marie “Bobbie” Garcia (nee Clifford). In another too good to be true irony – but this one certainly is – Jerry was named for composer Jerome Kern. That is a wonderful link between musical generations.

There are a lot of books about Jerry Garcia and The Grateful Dead. One is special: “The Complete Annotated Grateful Dead Lyrics” by David Dodd. One of the things that separated the band from others was the lyrics. Much of the credit goes to Robert Hunter. He was not alone, however. The lyrics are literate and have many deeply American themes. Dodd’s book, which initially was published in the 1990s, captures it all. Click here or on the image for more info. Click here or on the link for more on the book from Amazon.
The Garcias were a musical family. Jerry took piano lessons during much of his childhood. He lost part of his right middle finger during a vacation in the Santa Cruz Mountains when he was four years old. The profile describes the accident in detail and says that “Garcia later confided that he often used it to his advantage in his youth, showing it off to other children in his neighborhood.”

Joe Garcia died less than a year after the accident. That forced Bobbie to take over his stake in a bar. She eventually bought out his partner and became was so busy that young Jerry spent five years living with her parents. That is where his musical talent blossomed.

Eventually, the reunited family moved to Menlo Park and Garcia began to listen to the likes of Ray Charles, John Lee Hooker, B.B. King and Hank Ballard. He also was introduced to marijuana.

The profile goes on from there to trace the part of the story with which more people are familiar. It is very detailed and well written. The Daily Music Break has posted on Garcia and The Grateful Dead here, here, here and perhaps elsewhere. We’ve also posted on Joe Russo’s Almost Dead, a tribute band that is so good that Bobby Weir once sat in with them.

The Rascals Were Young Once
Yes: “Roundabout” and “Changes”
Comment