> Best Soundtracks
> Focus on the Greats: Rock
> How to Listen to Music
> Movies About Rock
> Recommended Rock Books
> Recommended Videos

All the lists in this guide are flexible. Many of the sites linked to below could be in other lists. In other words, there are news and commentary sites elsewhere. These seemed to fit most squarely, however.

American Songwriter
American Songwriter magazine is published bi-monthly. The magazine offers in-depth Q & A’s with up-and-coming, established and legendary songwriters, covers recording technology, including the latest gadgets and gear every songwriter should know about, and reports on the business of music publishing with interviews and insight from publishers, producers and other industry professionals. American Songwriter explores all genres of music – from country to hip-hop, folk to classical, rock to pop, blues to electronica and soul to r&b.

Boomerocity
Providing Baby Boomers interviews and reviews on the latest from the icons of their youth as well as on up and coming entertainers capturing their attention.

Brooklynvegan.com
Founded in 2004, BrooklynVegan is an independent, NYC-centric, multi-genre, mostly-music blog that focuses on international music news, album and live show reviews, pictures, festivals, tour dates, gossip, tips, song and album streams, videos, industry and tech news, special events and much more. Non-music stuff finds its way on to our pages as well including comedy, TV, movies and burlesque, and every post comes with an open exchange of ideas via the public commenting system and social media. We also produce a lot of live events, and have a radio show on SiriusXMU.

BTRtoday
Our mission is to inform and impact our audience in a positive way by identifying artists and cultural trends on the rise and contextualizing them alongside those that may be more established. BTRtoday is a media platform that offers on-demand podcast, video, and editorial content. It features a mix of the best rising and established musical artists and performers as well as diverse cultural and current events coverage.

Billboard
Historically the most important music site because it “owned” the charts. “The world’s premier music publication, Billboard has served the entertainment business since 1894. Beginning as a weekly for the billposting and advertising business, Billboard and its popular music charts have evolved into the primary source of information on trends and innovation in music, serving music fans, artists, top executives, tour promoters, publishers, radio programmers, lawyers, retailers, digital entrepreneurs and more.”

Rolling Stone
As important, historically, as the music itself. My observation is that Rolling Stone really, really likes creating lists.

Stereogum
Stereogum is a daily Internet publication that focuses on music news, reviews, interviews, and irreverent commentary. The site was created in January 2002 by Scott Lapatine.

This Day in Music
Music history, facts and trivia 366 days of the year. This Day in Music is a web site, book and a series of iPhone and iPad apps. The web site ‘This Day in Music’ was launched in 1999 and is one of the longest running music sites on the net. This Day In Music brings together all the significant events in the history of rock and pop, the facts, the figures, the dates, the times and the places, and most of all the stars that made rock and pop the most vibrant art form of the 20th and 21st centuries. 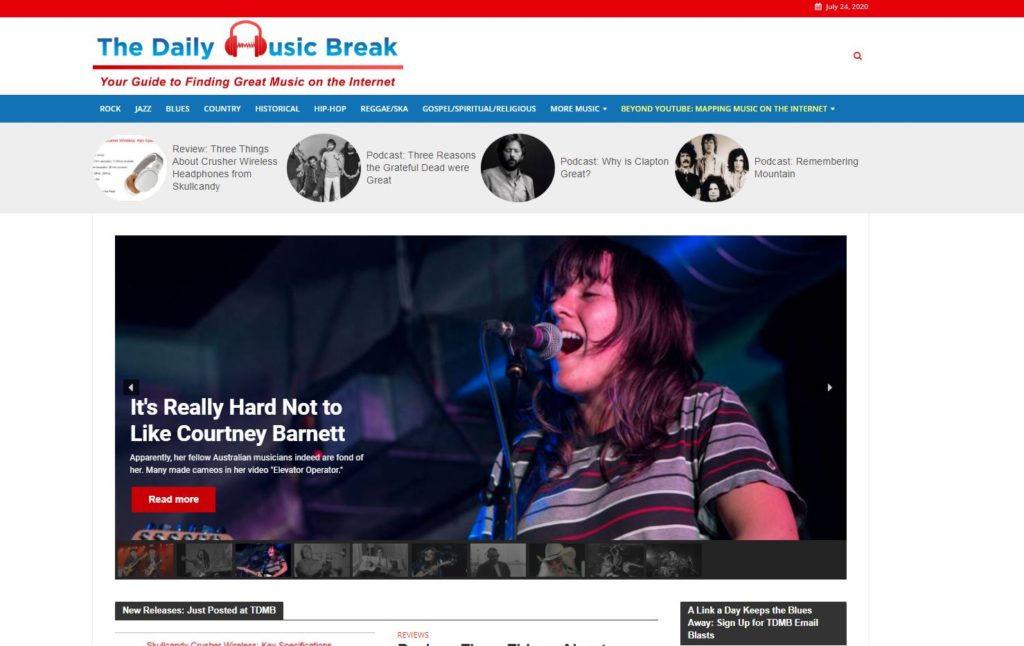 DJBooth
DJBooth creates content for the engaged music lover, those who want to stay at the forefront of music while the rest lean back. In an era of disposable, fast food content, DJBooth has a proven track record of creating compelling, organic work that cuts through the clutter, creates meaningful discussion and truly connects with readers.

Ear to the Ground
EarToTheGround Music features emerging artists primarily in the folk, indie rock, and roots music scenes.  The site has album reviews, artist interviews, and artist spotlights featuring a number of lesser-known musicians.  It is the purpose of the site to curate the digital music world, helping artists find an audience and music fans find exceptional, high-quality music.

Thefader.com
The FADER is the definitive voice of music and the lifestyle that surrounds it.

Glide Magazine
Established in the fall of 2002, Glide Magazine has grown to become a premier online entertainment resource. By continuing to avoid the rudimentary confines of genre or style, we’re able to devote our ongoing focus to covering today’s most innovative artists, regardless of musical concept or artistic method. Over the years, that basic vision has allowed us to offer our readers an audacious look at all the best in music, culture and life.Greatest Music of All Time is a podcast and video interview series celebrating the best music in the world across all genres. It comprises exclusive, candid conversations with artists who have written, recorded and performed music that has made a significant and lasting cultural impact.

Hullabaloo
Hullabaloo is a blog about music and how it connects us. Music writing by free-association with a focus on marginalized artists since 2014.

Indie Shuffle
At Indie Shuffle, we believe humans are better than robots when it comes to music discovery. Think about it. How many of your favorite bands were recommended to you by a friend? That’s why we’ve assembled a team of international writers to bring you the best music, including indie rock, hip hop, electronic, and everything in between. GENERAL

The Les Paul Forum
The Place for Les Paul enthusiasts since 1999.

No Depression
No Depression is a quarterly, ad-free, long-form journal on roots music published by the 501(c)(3) FreshGrass Foundation. Each issue features original in-depth articles and artist profiles, original illustrations, and stunning photography. The original music magazine began in 1995 and ran through 2008. To celebrate its 20th anniversary, No Depression returned to the page in 2015. Since 2009, nodepression.com has been a lively stomping ground for dedicated fans of roots music. What started as a community forum has since morphed into a specialized media outlet showcasing the best in roots music and music journalism. 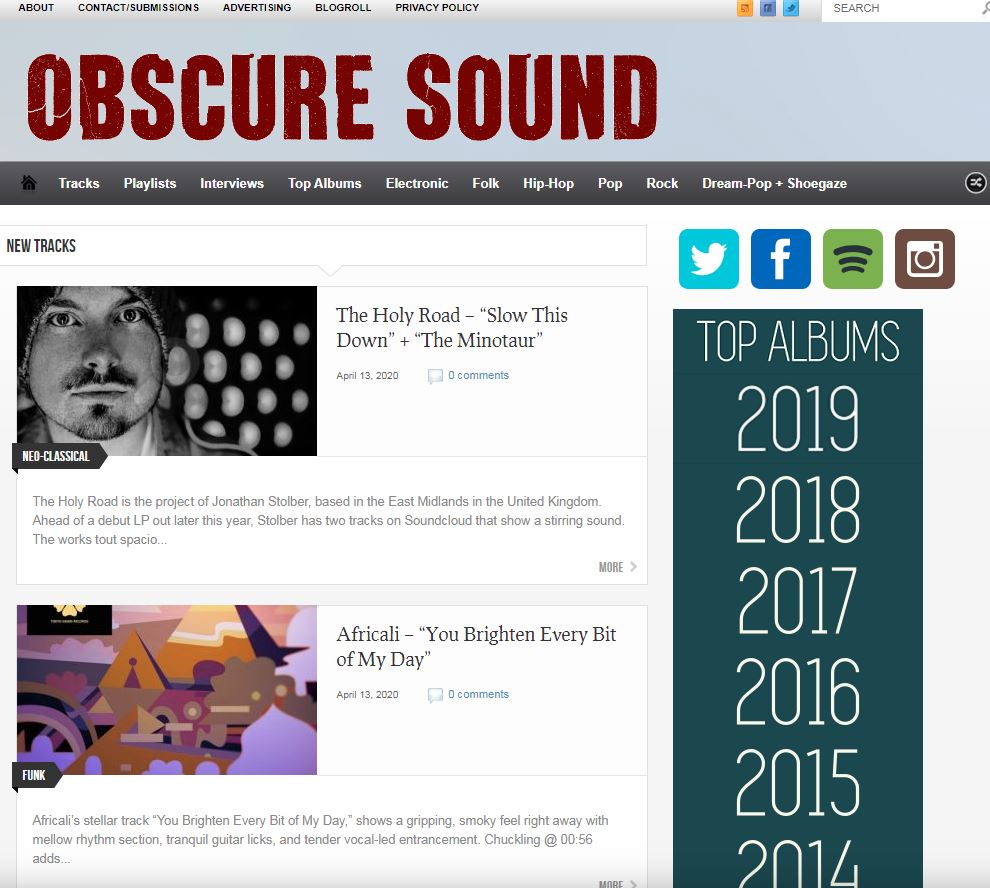 Obscure Sound
Obscure Sound is an indie music site that I formed in February 2006 out of a love for finding new and emerging quality music. My name is Mike Mineo and I’m the site’s founder and editor. I wrote for PopMatters and Stylus Magazine a few years before forming OS.

Offbeat Magazine
Jan Ramsey started OffBeat and its associated entities over three decades ago as an effort to improve and expand local music culture and business. Known for her scathing “Mojo Mouth” essays, Jan has been a music activist since the early 1980s, loves local music and culture, and is most turned on by making sure music is in the forefront of the minds of everyone who lives here or wishes they live here. She is a native New Orleanian and a (former) good Catholic girl…

Official Charts
With our finger on the throbbing pulse of the British record-buying, digital-downloading, music-streaming public, the Official Charts are the UK’s only official, trusted weekly barometer of what’s popular in music right now.

Paste
Paste prides itself on great writing about Music, Movies, TV, Comedy, Games, Books, Politics, Drinks, Tech and Travel. Led by founding editor-in-chief Josh Jackson since 2002, PasteMagazine.com has grown to more than 8 million unique monthly visitors, thanks to readers hungry for authenticity and creativity. Paste Studio features daily musical performances streaming via Facebook Live and YouTube Live from our offices in Midtown Manhattan and Downtown Atlanta, as well as the entire Daytrotter catalog of live audio and video performances.

Pigeons & Planes
Here’s the basic idea: Pigeons and Planes is a music discovery platform. It’s where you can keep up with new music, across all genres and from all corners of the globe. We put you on to good music made by good artists, whether they’re established stars or rising newcomers.

Playing for Change
Playing For Change is a movement created to inspire and connect the world through music. The idea for this project came from a common belief that music has the power to break down boundaries and overcome distances between people. [Editor’s Note: This snippet from the Playing for Change site doesn’t really describe what this tremendous site does. The idea is to take a well-known song in one culture – “The Weight” by the band and the Cuban classic “Chan Chan” are two examples and have them played by internationally acclaimed musicians from around the world. The production values are excellent and the results generally quite moving.)

Songfacts
Songfacts is a searchable database of song information where you can find out the stories behind the songs, get the lyrics, and watch the videos. We hope using this site will help you better understand and enjoy the songs you listen to, and invite you to share your thoughts about the songs in the comments section. We provide the album, year the song was released, highest US and UK chart position, and “Songfacts” about each song. The “Songfacts” are interesting tidbits like what the song is about, who wrote it, and what makes it different. Songfacts is free.

Thefader.com
The FADER is the definitive voice of music and the lifestyle that surrounds it.
This Song is Sick
ThisSongIsSick.com is all about making it easier for you to discover sick new music that you’ve never heard before. We work with musicians and record labels from all over the world to showcase a variety of the freshest new music.

Treble
Though we make no claims to be the utmost authority on what someone should or shouldn’t listen to, we do give honest, descriptive reviews while attempting to do so creatively. We try to cover a wide spectrum of music, ranging from electronic to punk to metal to hip-hop, and not all of us may be as well-versed, individually, in certain genres as we are in others. But the beauty of Treble is that it doesn’t represent one viewpoint—it’s a collective of many different people, with different opinions and ideas. And as music fans, we’re always keeping our ears open for what sounds new and exciting, no matter the style.

Variance
Variance is an online music and entertainment magazine, co-founded by Jonathan Robles in 2010 and based in Tulsa, Oklahoma. It also publishes a print magazine…

WaxPoetics
At Wax Poetics, we put music in context. Closing the noticeable gap in music journalism between coverage of contemporary artists and celebration of classic trailblazers, we provide extensive commentary on the dynamic relationship between past and present to educate today’s ears about the origins of their favorite music. What we started in December 2001 as a quarterly magazine, both classic and fresh, has grown into a diversified music media resource for music aficionados and general listeners alike. From our signature approach to print media to our giant steps into new media and the recording industry, we strive to revolutionize the way we educate ourselves about music.

We are the Guard
Who needs 20 million songs in their pocket?
I just want the 10 best new songs!
Picked by humans!!
Can’t Someone give me the best?
Music Filter Funnel
Yes they can!