It’s probably easy for a record label to issue a greatest hits album. Just see which cuts sold the most. But it is difficult to do it well. Hard choices must be made. This is from Jim Trageser’s review of Lightnin Hopkins’ “Mojo Hand”:  “Rhino has given us a broad musical history of Hopkins’ career, from solo acoustic settings to jazz combos to electrified boogie. We even get two cuts – “Antoinette’s Blues” and “Los Angeles Boogie” – on which Hopkins plays piano and organ, respectively. (And he played both as he did guitar – spare yet full, much as did Count Basie.) The recordings featured were made between 1947 and 1969, spanning Hopkins’ entire recording career.” Click here or on the image for “Mojo Hand” from Amazon.  iTunes doesn’t seem to carry the album, so here is a link to “Last Night Blues,” which is a remaster.
One of the most influential blues players of the last century was Sam Hopkins, better known as Lightnin’. The first paragraph of his profile at AllMusic says that the Texas native’s style didn’t change much through his career. Considering that he was active from the 1920s to the 1980s, such consistency suggests both discipline and stubbornness.

Hopkins was born in Centerville, Texas in 1912. His two siblings also were musically inclined, but it was Sam who got the big break. He met Blind Lemon Jefferson when he was a very small boy and became his guide and, apparently, musical protégé. One of the bios says that Hopkins was the only guitarist with whom Jefferson would play. Hopkins also worked with a cousin, an important early blues player named Alger “Texas” Alexander. That partnership existed both before and after Hopkins took a “vacation” at the Houston Prison Farm. The infraction that sent him there is not noted in the bios.

Lightnin’ was given his nickname by Lola Anne Cullum, who had already found Amos Milburn and sent him to Aladdin Records in California. She liked Hopkins but, apparently, not Alexander. She paired the guitarist instead with Wilson “Thunder” Smith, gave him his lifelong sobriquet and sent him west. Hopkins recorded for the label in both Los Angeles and Houston. His first hit was “Katie May,” which was cut in 1946. Other songs of note followed, all of which were influenced by his Texas roots. They included “Shotgun Blues,” “Short Haired Woman” and “Big Mama Jump.” 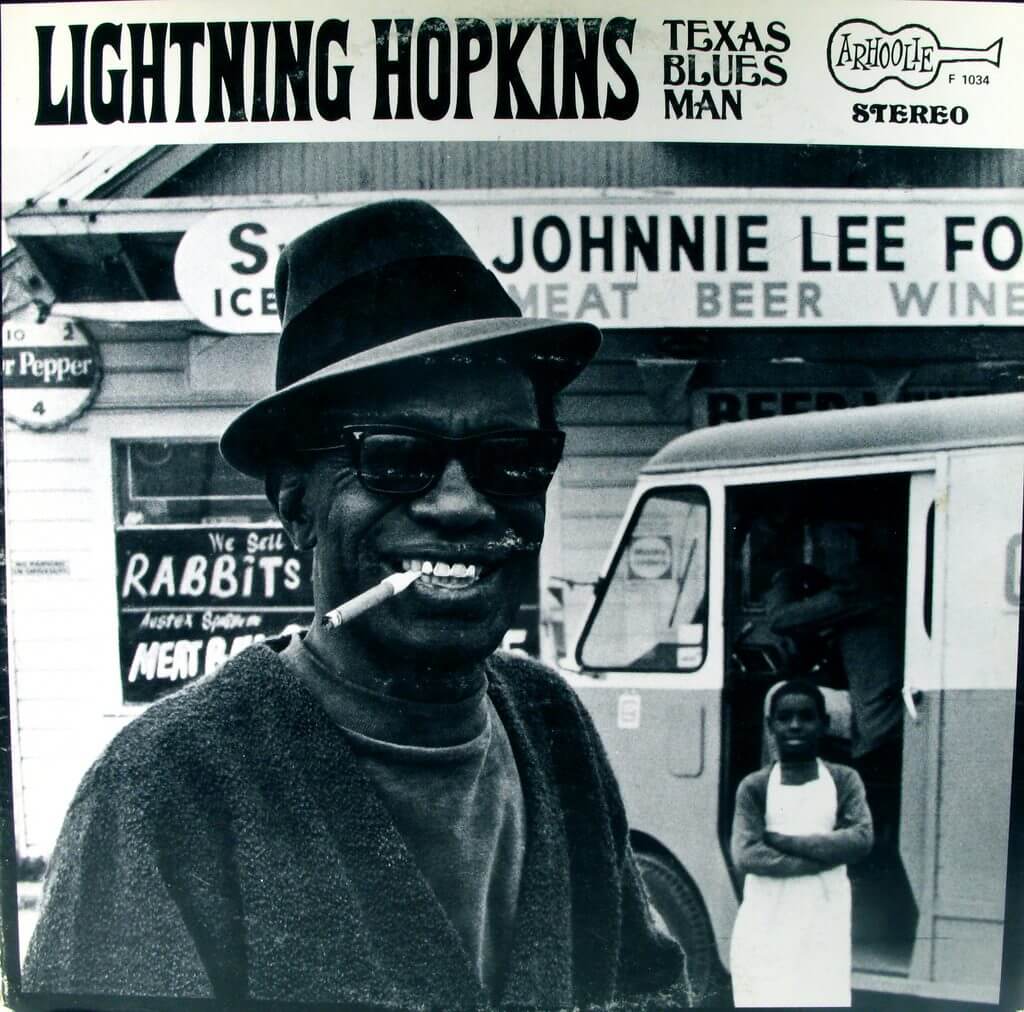 Hopkins played for Aladdin and other labels and on electric and acoustic guitar, but his popularity faded and he ended up back in Houston where, according to the bio,  he was “largely forgotten” as tastes began changing as the 1950s drew to a close. These are redemption stories, of course (at least about the artists we hear about decades later). Hopkins was rediscovered by folklorist Mack McCormick, who presented him as a folk-blues artist. The profile, written by Bill Dahl, says “it was a role that Hopkins was born to play.”

Wikipedia  says that Hopkins’ in essence played bass, rhythm, lead and percussion simultaneously. The explanation of his style is quite interesting, though toward the upper end of what a non-musician likely would understand. One thing that is clear is that Hopkins was in control: When he recorded, he generally would demand payment up front and did only one take.

Texas and the Blues

Wikipedia that Texas’ blues legacy began in the early 1900s among African-Americans working in oilfields, ranches and lumber camps. Jefferson was a much emulated innovator by incorporating “jazz-like improvisation and single string accompaniment.” The blues players gravitated to Galveston, Dallas and – as in Hopkins’ case – Houston.

That is quite a list of names. To many blues enthusiasts, one of those names – Stevie Ray Vaughan (or, one set of initials, SRV) – is synonymous with the greatest of guitarists. In 2011, the NRP’s Blog Supreme highlighted five guitarists who influenced Vaughan. Hopkins was the first name mentioned in the post. The item points out that Hopkins was prolific. He released between 800 and 1,000 songs. (By comparison, there only are about a dozen Robert Johnson recordings.) Hopkins also was unique for the early players in his liberal use of electric guitars. Most of the old blues players were unamplified.

The other four influences cited, by the way, are T-Bone Walker, Freddie King, Albert Collins and Larry Davis. Davis is the least known, but perhaps not the least important. One of Vaughan’s best known songs — and title track from his first album — is  “Texas Flood,” which originally was done by Davis.

In a sense, a list of great Texas blues albums will cover many of the same names. But specificity is great. Three years ago, Charles McPhate provided his opinion on the top ten Texas blues records. Of course, Hopkins is on the list. The ten are “Texas Bluesman” (1993) from Zuzu Bollin; “Freddie King Sings” a 1989 compilation; “Driftin’ Blues: The Best of Charles Brown” (1995); “T-Bone Blues” from T-Bone Walker (1959); “Ice Pickin’ ” from Albert Collins (1978); “Black Snake Moan,” from Blind Lemon Jefferson (2004 remaster); “Tres Hombres,” from ZZ Top (1973); “Complete Recordings” from Blind Willie Johnson (1993) and “Texas Flood” from Stevie Ray Vaughan (1983). The Lightnin’ Hopkins entry is “The Herald Sessions,” which was remastered in 2001.

Above is “Please Don’t Go” and below is “Mojo Hand (I’m Goin’ to Louisiana).” The influence on subsequent guitarists is obvious.

Jim Trageser’s review of “Mojo Hand” at his website was used in the blue box.