This weekend was the fourth time that Sonny Landreth played at Eric Clapton’s Crossroads Festival. His name can get lost amid the megastars that Clapton brings out. But it is no wonder that he gets invited.

Wikipedia gets uncharacteristically technical in its entry on Landreth:

Landreth is best known for his slide playing, having developed a technique where he also frets notes and plays chords and chord fragments behind the slide while he plays. Landreth plays with the slide on his little finger, so that his other fingers have more room to fret behind the slide. He’s also known for his right-hand technique, which involves tapping, slapping, and picking strings, using all of the fingers on his right hand. He wears a special thumb pick/ flat pick hybrid on his thumb so he can bear down on a pick while simultaneously using his finger style technique for slide.

Sonny Landreth is known for his use of Fender Stratocaster guitars and Dumble Amplifiers. He is also known to use Demeter and Fender amplifiers on occasion. Landreth uses Jim Dunlop 215 heavy glass slides and Dunlop Herco flat thumb picks. His guitars are fitted with DiMarzio and Lindy Fralin pickups, a special Suhr back plate system, and D’Addario medium nickel wound strings gauges 0.13 – 0.56. (Continue Reading…)

About.com leads with the Clapton connection:

No less an authority than the legendary Eric Clapton has called slide guitarist Sonny Landreth “the most underestimated musician on the planet and also probably one of the most advanced.” During a career that has spanned four decades, Landreth has earned a well-deserved reputation as a gifted slide guitarist, whose unique playing style mixes traditional slide with the unconventional technique of fretting the strings behind the slide. Throw in Landreth’s songwriting skills, and you have an exciting and original artist whose work plumbs the depth of roots-rock and swamp-blues. (Continue Reading…)

Above is Zydeco Shuffle and below is Z Rider. 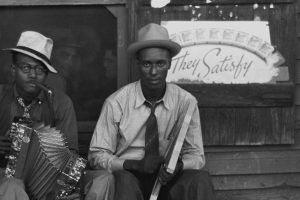 Zydeco, Buckwheat and Otherwise, is Fun 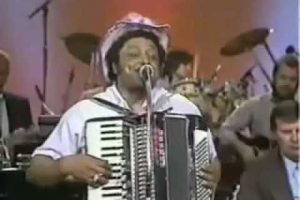 The Lost Bayou Ramblers
Clifton Chenier: The King of Zydeco