This Hank Williams video is odd for a couple of reasons, both of which are interesting. 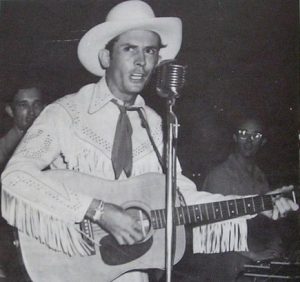 The first few seconds show Williams crossing a street under the watchful eye of a police officer. He may have just exited the stake house whose awning can be seen in the background. Williams was a superstar. Perhaps somebody knew he was in town and got lucky. It’s brief but interesting footage decades before cellphones made such video common.

The audio is the song “Lovesick Blues.” The ending makes clear that the performance is from a radio broadcast. The strange thing is that the video obviously shows Williams and his band performing a different song. There is not too much video available of Hank Williams, so it is worth watching despite the oddness of watching and hearing different songs. “Lovesick Blues” was recorded in 1948 and, according to Wikipedia, “carried him into the mainstream of music.”

The man had a short and tragic live — he died at age 29 — wrote great songs and had the prototypical country voice.

The Daily Music Break also covered Hank Williams’ classic song “Jambalaya (On the Bayou)” which was released in 1952.

There are a number of Hank Williams greatest hits-type albums. Here is a good looking one — “Hank Williams’ 40 Greatest Hits” at Amazon and iTunes.

Old Time Music in Clay County, West Virginia
Check It Out: Natalie Maines and the Jayhawks’ “Come Cryin’ to Me”
Comment