On April 22, two jazz greats — both bass players — celebrated birthdays. The day marked the ninety-seventh and eighty-fourth anniversaries of the births of Charles Mingus and Paul Chambers, respectively. A week later, an even more prominent jazz musician celebrated his birthday. Edward Kennedy Ellington was born 120 years ago Monday. 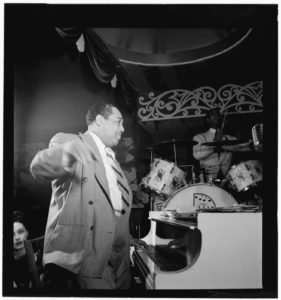 There is not much a lay person can say about Duke Ellington. He along with a very few others (names that come to mind are Louis Armstrong, John Coltrane, Charlie Parker and Miles Davis) shaped jazz. It’s arguable that only the first name on that list truly rivals Ellington in importance.

It’s not a contest, of course. They all are great. Here is the first paragraph of an un-bylined post at the Jazz at Lincoln Center blog that provides the type of context non-experts can’t:

No one in the history of jazz expressed himself more freely; or with more variety, swing, and sophistication than Duke Ellington did. While a masterful and sensitive pianist, Ellington ultimately proved that his true instrument was the American Orchestra itself. Leading and anchoring his ever-evolving band for half a century, Ellington showed how the American Orchestra could achieve a perfect balance of music that was both shaped by the composer while also birthed on the spot by the musicians, while also creating art that swung relentlessly while also achieving the heights of emotional engagement. Each of his compositions—which began to number in the thousands—was crafted to bring out the finest talents of the extraordinary individuals who traveled the road with him, and indeed the Duke Ellington Orchestra developed one of the most unique and instantly recognizable musical thumbprints of any ensemble.

Above is a six-song playlist of Ellington music. No post about Ellington would be complete without mention of his alter ego, Billy Strayhorn.  Strayhorn collaborated with Ellington on some of the most famous music ever produced in America.

The story is that Strayhorn approached Ellington as a young man and asked if it was possible for them to work together. Ellington told him to write a piece and the two would talk. He gave Strayhorn directions to his apartment. Strayhorn wrote the music but was stumped on a title. He looked at the first line of the directions Ellington had given him. Thus was born “Take the A train.” That was followed decades later by Lawrence Welk introduction of the song as “Take A Train.” (It’s unclear if that’s true, but it’s too good a story not to tell.)

The Daily Music Break has covered Ellington previously. He did the soundtrack and appeared alongside Jimmy Stewart in the landmark film “Anatomy of a Murder.” The site also conducted a video chat about Ellington with Jeff Claassen, a trumpet player and Associate Professor of Harmony at the Berklee School of Music. The video format was an experiment…and looks that way. The site also featured am Ellington performance of “Perdido” on The David Frost Show alongside two other great pianists: Willie “The Lion” Smith and Billy Taylor.

Biographies of entertainers –especially the important ones — are simultaneously stories about the world in which that person existed. It can be no other way, since art is a reflection of the experiences of that artist and his or her group. Terry Teachout, the drama critic for the Wall Street Journal, wrote a tremendous biography of Louis Armstrong. I haven’t his book on Ellington. If Teachout wrote it, it’s great. Click on the image or here. Back in the say, a lot was made of a recording session between Ellington and Louis Armstrong. The two were giants — both musically and charismatically. They had led intersecting but separate musical lives, and when they got together it was a big deal. Here is the album — justifiably called “The Great Summit,” at Amazon and iTunes.
TagsDuke Ellington jazz jazz. music